Learn more about the doctrinal foundations of New Church education

These quotations from New Church teachings are some of the seminal passages used to define the purpose of New Church education. They come from a collection of books most often referred to as the Heavenly Doctrines. Specific titles of these books follow each quote.

Learning to Connect with God

Without a proper idea of God no communication with the heavens is possible. (Divine Love and Wisdom 13)

When people possessing a heavenly love read the Word it links them to heaven and through heaven to the Lord, as a result of which they receive enlightenment and instruction. (Arcana Coelestia 9382:3)

The Word has been given in order to unite heaven and earth, or angels with human beings; and therefore it has been so written that it may be spiritually apprehended by the angels, when naturally apprehended by people; and that in this way what is holy may flow in through the angels, by which means union is effected. (Arcana Coelestia 6333:3)

Human beings, like the earth, can produce nothing good unless the knowledges of faith are first sown in them, whereby they may know what is to be believed and done. (Arcana Coelestia 44)

A person becomes spiritual by means of the knowledges of truth and good from the Word applied to the uses of life. (Apocalypse Explained 195:4)

All people…form for themselves as it were a soul, and such after death does their life become. Nothing therefore is of more importance to people than to know what is true…. What should a person have more at heart than their to eternity? If in the life of the body they destroy their soul, do they not destroy it to eternity? (Arcana Coelestia 794:2)

No one can be introduced into the church and formed for heaven, except by means of knowledges from the Word. Without these people do not know the way to heaven, and without these the Lord cannot dwell with them…. It is evident, therefore, that by means of knowledges people learn the way to heaven. It can also be seen that without the knowledges of truth and good from the Word the Lord cannot be present with them and lead them; for when people know nothing of the Lord, of heaven, of charity and faith, their spiritual mind, which is the higher mind, and is intended to see by the light of heaven, is empty, and has nothing from the Divine in it. (Apocalypse Explained 112:3)

The laws of civil and moral life are to be lived as Divine laws from God. (Divine Providence 322)

The instruction in civil and moral things is the responsibility of parents and teachers, and is part of a proper education. (True Christian Religion 443)

People are born natural, but are educated to become civil and moral, and afterwards spiritual, for in such a manner they are reborn. (Apocalypse Revealed 161e)

In every person there are three degrees of life…. The rational faculty is opened to the first degree by civil truths, to the second degree by moral truths, and to the third degree by spiritual truths. But it ought to be known that the rational faculty that consists of these truths is not formed and opened by a person’s knowing them, but by his or her living according to them… (Heaven and Hell 468:2)

People live a moral life from a spiritual origin when they live it from religion; that is, when they think, when anything evil, insincere, or unjust presents itself, that this must not be done because it is contrary to Divine laws. (Apocalypse Explained 195:2)

From the things that exist in the natural world the things of the spiritual world can be seen as in a mirror. (Heaven and Hell 56e)

Sensuous truth consists in seeing all earthly and worldly things as being created by God, and each and every thing for a purpose, and in all things whatsoever a certain image of God’s kingdom. (Arcana Coelestia 1434)

In respect to those that have acquired intelligence and wisdom through knowledge and science, who are such as have applied all things to the use of life, and have also acknowledged the Divine, loved the Word, and lived a spiritual moral life, to such the sciences have served as a means of becoming wise, and also of corroborating the things pertaining to faith…. All this makes clear that it is by means of knowledges and sciences that a person is made spiritual, also that these are the means of becoming wise, but only with those who have acknowledged the Divine in faith and life. Such also before others are accepted in heaven and are among those there who are at the center…because they are in light more than others. (Heaven and Hell 356:1,3)

All factual knowledge…belong solely to the external part of a person; for these are acquired from earthly and worldly things by means of sensory impressions so that they might serve the interior or rational person; and that this interior person might serve the spiritual person, the spiritual person the celestial person, and the celestial person the Lord. (Arcana Coelestia 1486)

[When knowledges from the Word are lacking] people remain only in the atmospheres and material forms of nature to which their senses of sight, hearing and smell are restricted, and from which they derive no other ideas of heaven and of the Being and Essence of God than those that are atmospherical and material. Thinking from such ideas they can form no conclusions about God, as to whether He exists or not, or whether He is one or many; still less what He is in respect to His Being and Essence. (True Christian Religion 24:2)

The Means of Education

Truths are first implanted in the mind through instruction received from parents and teachers, then from the Word of the Lord, and after that from personal reflection on them. (Arcana Coelestia 3762.2)

As people advance in age, good and truth are given them by the Lord. At first they are led into a knowledge of them, then from knowledge into intelligence, and finally from intelligence into wisdom, always accompanied by innocence…. Without this faith and a perception of it no one can receive anything of heaven. (Heaven and Hell 279)

By means of doctrine the Word not only becomes intelligible, but also as it were shines with light. This is because without doctrine it is not understood, and is like a lampstand without a lamp… By means of doctrine therefore the Word is understood, and is like a lampstand with a lighted lamp. People then see more things than they had seen before, and also understand those things which before they had not understood. (Doctrine of the Sacred Scripture 54)

The Word needs to be taught mediately through parents, teachers, books, and especially the reading of it. Nevertheless it is not taught by these, but by the Lord through them. (Divine Providence 172:6)

Let people read the Word every day, one or two chapters, and learn from a teacher and from preachings the articles of their religion; and especially let them learn that God is one, and that the Lord is the God of heaven and earth…that the Word is holy, that there is a heaven and a hell, and that there is a life after death. (Apocalypse Explained 803) 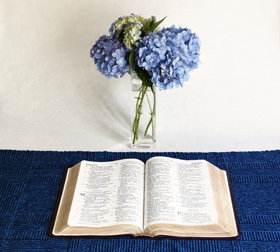